A Review Of The Newly Renovated Glasslands Gallery

Better than before, but with one major flaw

In the early days of the Glasslands Gallery the place was constantly changing. Not only would the art installations change every month or two but the place was often literally under construction. Did you know there used to be a ladder behind stage right which you could climb to get to a little loft? They eventually filled that in. Remember the art room in the loft where you could literally go paint on the walls between sets? Those were the older, more experimental days of Glasslands Gallery. Back in the days when warehouse art spaces in that part of town were a new thing. Now there are what, five on that block alone?! 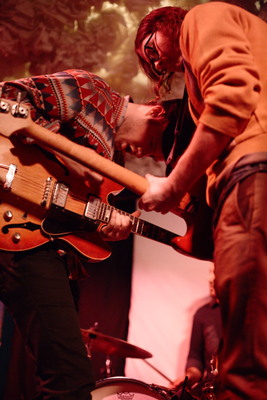 Glasslands seemed to have matured and settled down sometime around 2011. The owners stopped changing the art on the walls, bought some LED panels for lighting, and split up the bathrooms to create five tiny, horrible stalls. They settled on the now-infamous cloud background for the main stage (see photo) then moved the stage towards the rear corner of the main room. And that is how things stayed for about two years.

If you have been there recently you may recall that the loft was closed. I think it was closed for most of 2013 actually. Then at the end of March Glasslands was completely closed for about a week. Rumor had it that they were renovating the place in a big way. Yes, even the iconic clouds were going to be replaced.

On Saturday, April 27th I made it to Glasslands for the first time since the renovations. Overall it really hasn't changed all that much. The loft is open again and has less furniture in it but is otherwise unchanged. Those five nasty stalls were turned into three much nicer bathrooms. For some reason the bathrooms still lack a roof but they are otherwise massively improved. They are actually private, narrow but with enough space to put down a bag, the doors can be closed and latched, and each of them has a small sink. I daresay they're even kind of cute now.

The clouds have been replaced with "stars" made of PVC pipe. There must be some LEDs in the pipes because they emit light of various colors and flash on and off, sort of like they are twinkling. They can also flash to the music. Not bad, if a bit LA-ish. Unfortunately I didn't take any pictures of them. I recommend checking out these photos of the stars (and the bands who played that night) before reading the rest of this article.

You might notice when you look at those pictures that they are really dark. This is the problem I'm going to spend the rest of this article bitching about. I don't think the darkness was an artistic choice by the photographer or a case of poor equipment (e.g. using a slow zoom lens). I think that the stage lighting at the new Glasslands has actually become noticeably worse post-renovations. 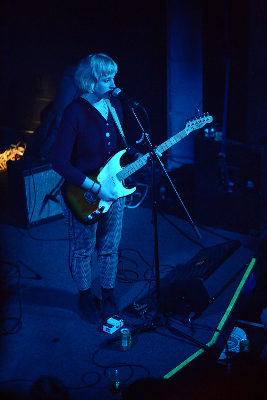 The really annoying thing is that the lighting there wasn't all that good in the first place. Those clouds used to block the LED panel on stage right a bit. The new stars block it even more. On top of that I'm not convinced that all of the green LEDs on the front panel are able to light up. While there is a third spotlight, a bland yellowish one in front, they left it turned off for 90% of the show. The stage was just really amazingly dark. Between that and all the smoke it was hard to make out individual musicians at times!

Let me be more precise about this. I took the two photos on the right at Glasslands on March 3rd and April 27th using the same camera (a Canon 5D Mark III). They may not look all that different in brightness except in that the upper on is pointing up at the white clouds while the lower one is pointing at the dark stage. However, the upper one was taken at ISO 12800, f/2.0, 1/125th of a second. The lower one was taken at ISO 25600, f/1.8, 1/50th of a second. That is a 2-2/3 stop difference, which is to say the stage was six times brighter before (note: this is approximate since I used different lenses). Yes, obviously a different set of the LEDs on the panels were turned on for each shot, probably all-red and some green for the upper, definitely all-blue and some green for the lower (I checked). Maybe the red LEDs are brighter than the blue or were turned up more, but 2-2/3 stops is a huge difference.

I suppose this could have been intentional but why? Perhaps the venue owners want the place to be dark. Maybe the stage is as dark as night to mesh with the new "twinkling star" art installation, I don't know. It just seems awfully strange to me to be able to honestly say that Death By Audio, with its tinted CFL blub lighting, actually has better lighting than Glasslands. Yet this truly seems to be the case.

Here's another way to think about this situation. In order to get the shot of Waxahatchee (bottom) I basically had to push my high-end camera to the limit and even then the shutter speed was really too slow. To get the show of Raccoon Fighter (top) I had some leeway. Perhaps the shutter should have been faster or the aperture smaller but I had another stop of ISO to work with. What I saw and what the numbers tell me is that the new lighting just is not good enough for non-flash photography.

Now, I know that some people would argue that the venue shouldn't worry about what photographers want and should focus on putting on a good show instead. Is good lighting really just for sake of the photographers? Does making the stage nearly invisible really make the show more enjoyable for the fans? Personally I think headliners The Babies look quite good under colorful lighting. Why wouldn't we want to be able to see the band?

Of course some photographers just pulled out flashes and blasted away to get their shots. The only other photos of the show I could find were all flash photos. I assume that we all want to discourage that sort of thing because it is so annoying, but poor lighting encourages everyone from the pros to smartphone owners (which is to say, everyone) to use their flashes. Just banning photography is also an option, but realistically bands and venues both tend to like free PR. I would be surprised to hear that any venue ever refused to let BrooklynVegan or CMJ send a photographer. And forget about banning smartphone photo-taking. Not that anyone should overdo it, but people like to be able to take the occasional snap. The darker then venue, the more of those which will be flash photos.

While Glasslands has improved in many ways I have to say, the stage lighting really bugs me. It was awfully dark before and seems to be even darker now. I really think they should turn the dang stage lights up. However that isn't always possible. For example when rotating between colors (red to blue to green) like they did during the Raccoon Fighter show only a fraction of the LEDs would ever be turned on, limiting the brightness. To really improve things maybe they should add an LED panel on stage left. Not only would this give them more maximum brightness but it would create more lighting possibities as well, e.g. lighting the stage just from the sides for a dramatic look, or to avoid blinding the band.

No complaints about the new bathrooms though. They are awesome.